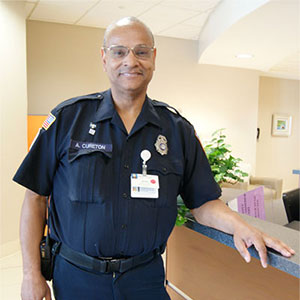 From coming of age in Chicago during the turbulent Sixties, to spending a year with the Army in Vietnam, to a 27-year career with the Chicago Police Department, much of it working in challenging public housing areas – André Cureton has lived a “front lines” kind of life.

And among the lessons learned from that life is this: “Health is so important. If I’m not healthy and strong, I can’t help anyone else.”

Those are Cureton's words and that’s why he pays attention to his doctor’s advice about check-ups and screenings. That advice has paid off, since his latest screening may have saved his life.

Colonoscopy is a procedure that lets your doctor examine the entire length of the large intestine. It may be used to screen for early signs of cancer or to diagnose inflamed tissue, ulcers, bleeding, or other disorders. Preparing for the test involves fasting the day before and cleaning out the digestive tract. Because the preparation is considered unpleasant, many people postpone or skip this screening, which can find colon or rectal cancer in its earliest and most treatable stage.

Cureton had his first colonoscopy in his early fifties. His Chicago doctor found a polyp during the procedure – a small growth on the intestinal lining that could turn into colorectal cancer. The polyp was removed during the colonoscopy and he got a clean bill of health, but his doctor cautioned him to have regular colonoscopies.

Cureton retired from the Chicago Police Department and traded Chicago winters for Savannah summers, moving here because a colleague from the police department was also retiring here. Cureton took a security job with Memorial University Medical Center. While it lacks the drama and danger of his Chicago policing days, the job has its own brand of excitement -- like the time he had to deliver a baby boy when a couple didn’t make it through the front door before the stork arrived.

Cureton had another colonoscopy in 2017. He’s glad he didn’t procrastinate, since that exam found still more polyps. None of them were cancer, but any of them could have turned into cancer over time. His gastroenterologist, Steven Carpenter, M.D., removed them during the colonoscopy, and Cureton was back to work the next day.

“They explained everything, talked it all out with me. The staff was unbelievable. They made me feel safe and well taken care of,” he said of his experience at Memorial Health University Medical Center’s Gastrointestinal Procedures Center.

The American Cancer Society recommends getting a colonoscopy every 10 years, beginning at age 50. You should be screened more often if you have certain risk factors or a family history of colorectal cancer. Talk to your doctor about the best screening schedule for you.