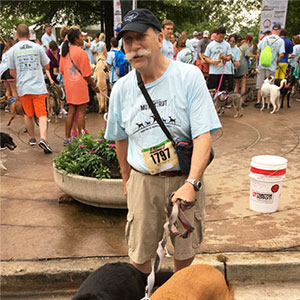 Matthew Wagner understands that there’s pain, and then there’s the type of pain that casts a cloud over everything else in your life. He believes that when you experience life-altering pain, you have two choices: fix it or be miserable for the rest of your life.

"If you have an issue, have it dealt with. Find someone you’re confident and comfortable with to help you deal with it. Because life’s a whole lot better on the other side [of pain],” said Wagner.

Wagner is 70 years old and is retired from a career in advertising. Extreme pain drove him to have back surgeries in 1974 and 1980. For the next 34 years, he did not have any major issues. But in 2014, he began to get a painful tingling sensation in his lower legs. It was so uncomfortable, it woke him up at night. Over time, it became painful to walk. Wagner was living in Bluffton, South Carolina, at the time, and was referred to neurosurgeon James Lindley, M.D., at Memorial Health University Medical Center in Savannah.

Lindley performed surgery to fix a disc issue in Wagner’s back, and he returned home the same day.

“I walked out of the hospital, which was quite an experience. After my back surgeries in ’74 and ’80, I was in the hospitals for extended stays and not able to walk out of the facilities on my own, so this was quite impressive.”

Wagner’s back remained pain-free for the next year-and-a-half. But it all changed the day someone crashed into the back of his car while he waited to make a left turn. Wagner knew he had whiplash from the accident, but he didn’t realize how bad it was. His neck pain would wake him up several nights a week. He would experience a popping or cracking sensation in his neck, followed by an extreme headache that would last for 12 hours or more. He visited a pain specialist who referred him back to Lindley.

This time, Lindley recommended three procedures, one for Wagner’s neck, one for his back, and one of his hand and wrist. On January 27, 2016, Lindley fused together four vertebrae in Wagner’s neck. Wagner spent one night at Memorial Health University Medical Center and went home the next day.

Seventy-five days later, he returned to Savannah for surgery to decompress and fuse a vertebra in the middle of his back. Again, he went home after just one night in the hospital (although he said that if his surgery had been in the morning rather than the afternoon, he likely could have returned home the same day).

Wagner and his wife recently moved farther north, near Greenville, South Carolina. But he is so confident in Lindley’s surgical skills that he drove back to Savannah when he needed carpal tunnel surgery just so that Lindley could perform the operation.

After three life-changing neurosurgery procedures, Wagner has nothing but good things to say about Lindley and the Health Health Neurosurgery Center. When he meets others who are living with back or neck pain, he encourages them to contact Lindley, and it’s not a recommendation that he takes lightly.

“If I’m going to recommend a neurosurgeon, I better feel pretty darn confident about it. We’re not talking about fixing a hangnail!” joked Wagner.

Today, Wagner has the energy and mobility to do the things he enjoys. He walks his dogs or takes them to the dog park daily. He loves playing games with his grandchildren. And in a few months, he and his wife, Judy, will vacation in Italy. Wagner is living the life he wants because he refused to be controlled by pain.