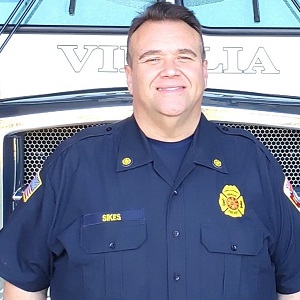 Brian Sikes was always an athletic guy. He played football in high school, lifted weights and rode thousands of miles on his bicycle. His 27-year career as a firefighter for the City of Vidalia Fire Department kept him active as well. Four years ago, he was promoted to fire chief.

But his life changed dramatically when an everyday task resulted in years of pain. "I bent down to pick up a piece of trash and I felt a sharp pain in my back," said Brian. "Over the years, I probably hadn't taken the best care of my back and it just caught up with me that day."

Over the next eight years, Brian's back pain grew worse, leaving him in agony 24 hours a day. He wasn't able to exercise and he gained a lot of weight. "I was miserable, depressed and constantly hurting," he recalled. He slept in a recliner because that was the only way he could be comfortable.

His wife, Kathy, encouraged him to consider back surgery. Although he was apprehensive, Brian agreed to see a surgeon. "I was tired of being in pain all of the time," he said.

He scheduled an appointment with orthopedic spine surgeon Dr. Raphael Roybal, who practices at Memorial Health's spine center of excellence. During the initial consultation, Brian learned that he was too overweight to have the surgery. That appointment would set in motion a series of life changes for Brian.

First, he met with Dr. Oliver Whipple of Memorial Health University Physicians | Surgical & Bariatric Care, who recommended gastric sleeve surgery, a procedure that reduced the size of his stomach. Brian had bariatric surgery in September 2016, and within a few months after surgery, he had lost 130 pounds. Even after the weight loss, his back pain didn't improve.

His next appointment with Dr. Roybal was more promising. Dr. Roybal suggested a new robotic spine surgery available at Memorial Health. "He told me that this surgery wasn't an option when I first hurt my back because the technology wasn't available." In April 2018, Brian was one of the first patients at Memorial to have minimally invasive spine surgery using the Mazor X robotic technology.

The surgery was a success. Brian recalls that Dr. Roybal's physician assistant, Malissa, came in after surgery to get him up and walking. After taking those first few steps, Brian realized his back didn't hurt anymore. "I was almost in tears. I would have been happy if my pain had been less. I never expected to be pain-free," he said.

Brian says the experience has been life-changing. "I'm able to do things I haven't done in years." But there are still some changes he wants to make. "My goal is to lose 85 more pounds before my next birthday [November 10, 2019] and get back on my bicycle," he said. "The back surgery has allowed me to continue on my weight-loss journey." He knows he needs to take it slowly, but Brian says he feels "unstoppable" now.

Brian credits his family's support and his faith in God for getting him through years of suffering. "Even though the last eight years were hard, I always trusted that God would lead me through it," he said. He always believed that "no matter what's going on in life, you can overcome it by staying close to God."

He has a passion for helping others and hopes that by sharing his story, others will find the relief from their pain, too.