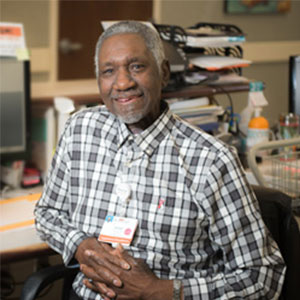 Hamiel Powell knew something was wrong when he began to experience chronic hoarseness in 2014. He was prescribed antibiotics for respiratory and throat issues, but they didn’t help. Fortunately for Powell, he’s persistent, and his search for answers led him to the Memorial Health University Medical Center Curtis and Elizabeth Anderson Cancer Institute (ACI). There, otolaryngologist Guy Petruzzelli, M.D., Ph.D., MBA, diagnosed the 64-year-old former smoker with stage 4 cancer of the larynx (voice box). Within days, Powell was scheduled for the surgery that would save his life, but forever change how he speaks.

“If you have never been through it, you have no idea what’s going through people’s minds when they get diagnosed,” Powell said of his cancer experience. “I like to sit down and talk with people, and let them know there’s life after cancer.”

Today, Powell uses an implanted artificial voice box to speak, holding a hand to his throat. His words, despite a gravel-like tone, are perfectly clear. His message is clear, too: He wants to help other cancer patients weather the storms he survived.

Powell faced an uphill battle as he went into surgery. Stage 4 is a late-stage cancer, and his doctors fought it with all the resources a comprehensive cancer center such as the ACI can muster. After surgery, he received radiation treatments and chemotherapy. Powell was unable to speak throughout those months, but was able to eat normally – especially once he learned the chemo veteran’s trick of using plastic instead of metal utensils to avoid the characteristic metallic taste chemo patients often experience.

Powell emerged from the rigorous treatment without his sense of smell. But his power of speech was restored after he recovered enough for a second surgery that equipped him with an artificial voice box. His first words with his new voice were to tell his wife of 31 years, Mary, that he loved her and to greet his surgeon, Petruzzelli. Shortly thereafter, in his long-standing role of deacon at Second Saint Luke Baptist Church in downtown Savannah, Powell read the 23rd Psalm before the congregation.

His illness persuaded Powell to retire after 40 years in the homebuilding industry and another four with Savannah College of Art and Design. But he doesn’t sit home. He’s a full-time volunteer at the ACI, where he ferries items to the lab, restocks refreshments for patients, delivers supplies, and handles whatever other tasks the team asks. His most important role, however, is as a cheerful and well-informed survivor who is eager to share his experiences with other patients who need support and encouragement. He’s a mainstay at the ACI’s head and neck cancer support group, and Petruzzelli often asks him to meet privately with newly diagnosed patients with laryngeal cancer.

“I’ve been trying to figure out how to give back,” Powell said. And’s he’s clearly figured that part out.