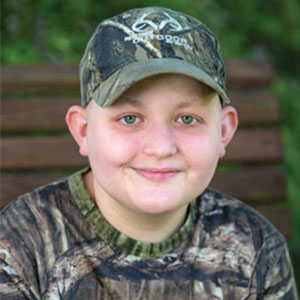 Hunter Stanfield’s blue-green eyes sparkle beneath the brim of his camouflage baseball cap. He wears his “lucky cap” everywhere, and it hasn’t failed him yet. The cap helped the 13-year-old graduate from 7th to 8th grade, bring home a turkey during the spring hunting season, and catch plenty of fish. It has also been on his head through six rounds of chemotherapy and the fight of his life against a blood cancer called non-Hodgkin’s lymphoma.

Hunter started to feel sick in February 2015. He had a sore throat, a high fever, nausea, and exhaustion. He was diagnosed with mono and a staph infection, and he began treatment immediately. But instead of getting better, Hunter got worse. His throat became so swollen that he couldn’t eat and his weight dropped. Doctors did a CT scan and found that all of the lymph nodes in his neck and chest were enlarged. He was sent from his home in Glennville, Georgia, to Memorial Health University Medical Center in Savannah. After five days in the hospital, Mandy and Judd Stanfield received the news no parent wants to hear – their son had stage 3 cancer. He would immediately begin six rounds of chemotherapy. For each round, he would spend five days in the hospital then return home to recuperate before the next round.

“We went through every emotion – crying, anger, praying. But at least we finally knew what was wrong with Hunter and we could start moving forward,” said Mandy.

Hunter received his first chemotherapy treatment in March. Within three days, all of his symptoms improved. He was finally able to eat and began showing signs of recovery. He continued chemotherapy as planned for the next three months. Because Hunter loves the outdoors, his family would take him hunting, fishing, or on drives through the country when he felt well. His 8-year-old brother, Gage, kept him entertained, and Hunter kept in touch with friends through social media and his PlayStation gaming system.

But after his June chemotherapy treatment, Hunter did not bounce back as quickly. He was exhausted and had developed sores in his mouth that made it difficult to eat. Mandy took him back to the hospital where he received fluids for dehydration. But he still did not improve. Next, he received two pints of blood. Still no improvement.

“That was the first moment when I was really scared,” said Mandy. “It’s so hard because you want to give your child everything. You want to take their place so they don’t have to go through this, but you can’t.”

Hunter’s blood pressure plummeted. He was transferred to the pediatric intensive care unit (PICU) and his small body was pumped full of fluids. He was showing early signs of pneumonia and had a raging infection in his body caused by an intestinal bacteria called C. diff. For the first time, Judd and Mandy faced the possibility that they might lose their son. They attached Hunter’s lucky cap to the PICU bed, held his hand, prayed, and encouraged him to keep fighting.

Doctors told the Stanfields that the infection had attacked Hunter’s entire body. It was so bad in his intestines that they wanted to perform surgery to remove a portion of his small intestines. But Hunter was so sick and weak that the surgery itself was very risky.

After surgery, Hunter was nearly unrecognizable to his parents. He was pale and thin. He had a tube in his nose, tubes on both sides of his chest, an I.V. running into his arm, a chemotherapy port under his skin, and a six-inch incision on his abdomen. But he was alive.

A few days later, a PICU nurse came into the room to check Hunter’s vital signs. He held his breath. The nurse became nervous when she realized he wasn’t breathing. She was about to call for help when Hunter exhaled and began laughing. At that moment, Mandy knew her son was back. Hunter loved playing practical jokes and making people laugh.

On June 30, with his lucky cap back on his head, Hunter was moved out of the PICU and back to his beloved care team on the children’s chemotherapy unit. One by one, the tubes were removed from his body. He began walking and eating. On July 9, after 28 days in the hospital, Hunter finally went home to recuperate and prepare for his final two rounds of chemotherapy.

A scan a few weeks later showed that the tumors in Hunter’s body were gone and there were no new areas with cancer. The final two rounds of chemotherapy would help ensure that he stayed cancer-free.

On August 21, 2015, Hunter finished chemotherapy and enjoyed a “no more chemo” party with this family and care team. His sandy blond hair is growing back, although he still keeps it tucked under his lucky cap. He’ll return to school and finish 8th grade with his friends. He’s already looking forward to deer hunting season and spending the fall and winter outdoors, where he always wants to be. Hunter Stanfield has big plans, and he’s not about to let anything stop him.