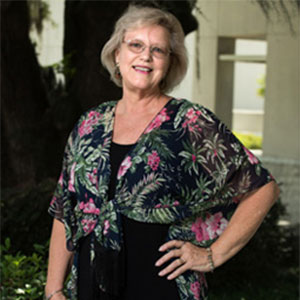 It’s not easy to keep up with Jan Carter of Savannah. The 70-year-old works out with a personal trainer, makes beautiful creations with her knitting needles, volunteers at a local yarn shop, takes care of four cats, and spends time with her husband, Bob. She never takes her good health for granted, especially since she experienced a life-changing health scare a year ago.

It was Labor Day weekend 2015, and Carter knew something was wrong. She didn’t feel well and she began sweating profusely. Fearing something might be wrong with her heart, she went to the emergency room at Memorial Health University Medical Center. Doctors ordered a CT scan of Carter’s entire body – that’s when they found a mass the size of a small lemon growing on the tail end of her pancreas. Carter and her husband were devastated.

“We were so afraid in the beginning. When you talk about something being wrong with your pancreas, it’s really scary,” said Carter.

Carter knew there was a chance it could the pancreatic cancer, but her doctors needed to collect a sample of the mass and test it to be sure. The problem was, because of the tumor’s size and location, they could not get a sample for a biopsy.

Carter was referred to surgical oncologist Christopher Senkowski, M.D., at the Memorial Health Curtis and Elizabeth Anderson Cancer Institute (ACI). Senkowski specializes in minimally invasive gastrointestinal procedures and is well-known for his surgical expertise. When Jan and Bob Carter met with him, they were worried and anticipating the worst. But Senkowski immediately put them at ease.

“Dr. Senkowski made me feel so much better. He relieved a lot of my fears. He’s very positive and he has a sense of humor. He took the attitude of, ‘let’s get this done and get it behind you,’” said Carter.

Based on the imaging scans, Senkowski did not think the mass was pancreatic cancer. It was too small to be biopsied, but he felt it should be removed and examined. On January 5, 2016 – just two weeks before her 70th birthday – Carter had surgery at Memorial Health University Medical Center. Using tiny cameras and surgical tools, Senkowski removed the tail of Carter’s pancreas, her spleen, and several lymph nodes. Because it was a minimally invasive surgery, she only had one small incision above her belly button and two small punctures on the left side of her waist. Carter spent four days in the hospital, but she was up and walking the next morning.

“I expected a lot of pain and suffering, and I really didn’t have any. My recovery was fantastic,” said Carter.

Pathology tests on the tumor identified it as a solid pseudopapillary neoplasm, a rare form of pancreatic cancer that can spread to other parts of the body if it is not removed. However, because Senkowski took out the entire tumor, Carter would not need any further treatment and could put the whole ordeal behind her.

Carter spent several weeks recovering at home. Thanks to the minimally invasive surgery, her recovery went very smoothly. She said the hardest part was not being able to pick up and hold her cats until her abdomen had healed.

These days, she’s back to her busy, active lifestyle. She still can’t believe that she could endure a major surgery and barely miss a beat.