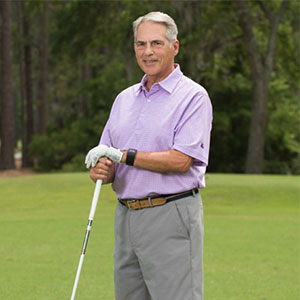 For more than 35 years, Joe Grispo of Savannah was a runner and athlete. But in 2014, he began to experience upper and lower back pain that threatened to end his active lifestyle. To relieve the pain, he tried every treatment he could find -- physical therapy, chiropractic care, steroid injections, and radiofrequency ablation. The upper back pain improved, but his lower back pain just kept getting worse.

An MRI test showed that the lowest vertebrae in his back, the L4 and L5 vertebrae, had slipped out of alignment by more than 5 millimeters and were putting extreme pressure on the nerves in his spine. The misalignment was also causing shooting pain down his right leg, a condition known as sciatica.

“I would get up in the morning and could barely walk on my right leg. I would limp around and could not wait to eat something so I could take a painkiller to make it more tolerable,” said Grispo. “I could not play golf. Standing and walking were painful. The pain was impacting my life. I could not do the things I wanted to do.”

Since he had already exhausted every non-surgical option, Grispo began researching neurosurgeons and talking to other people who’d had back surgery. All signs pointed him toward James Lindley, M.D., an experienced, fellowship-trained surgeon at the Memorial Health University Medical Center Neurosurgery Center.

“When I met with Dr. Lindley, he sat down and talked with me for 30 to 40 minutes. We looked at all of my X-rays and MRIs and he explained exactly what he thought should be done. He was very thorough. I knew I wanted him to do the surgery,” said Grispo.

Coincidentally, there was an unexpected cancelation and Lindley could operate on Grispo the very next morning. Even though he'd never been admitted to a hospital before in his life, Grispo scheduled the surgery without hesitation. On November 30, 2016, Lindley removed a damaged disc between the L4 and L5 vertebrae to relieve pressure on Grispo’s spinal cord. He then fused the vertebrae together using a bone graft taken from bone in Grispo’s pelvis. The graft was held in place with a medical device called an interbody cage and other instruments for spinal stabilization.

Not long after surgery, Grispo’s therapy team had him out of bed and walking. Grispo knew the procedure had been a success because for the first time in more than a year, he could walk without pain. He spent one night at Memorial Health University Medical Center and went home the next day.

In the first few days after surgery, Grispo could only walk short distances and he had to be very careful not to bend or lift anything that could strain his back. But within three weeks, he was driving. Within three months, he was walking 30 minutes or more twice a day. Today, he is five months post-surgery and he works out regularly at the gym. Best of all, he is living a life without constant pain.

Grispo offers the following advice to anybody considering neurosurgery: