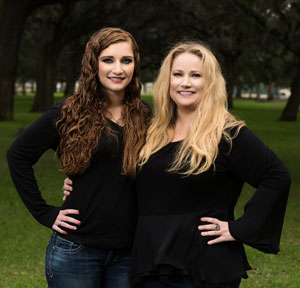 In 2015, Annemarie Traub was living a nightmare. Her teenage daughter, Katelyn, had been in and out of a Savannah mental health facility numerous times, and nobody could provide an official diagnosis or any long-term treatment recommendations for her. Annemarie was a single mom and was unable to work because she was caring for Katelyn. She was watching her daughter slip away from her. Her younger son was scared and his life was disrupted as well. The family was at a breaking point.

“I wouldn’t want anybody else to go through what we experienced. I had given up hope,” said Traub.

The issues began when Katelyn was just 16 years old; that’s when she had her first episode of manic behavior. Over the next two years, Katelyn was admitted to a facility in Savannah for treatment eight times. Each time, she received a new medication and was sent back home. But the symptoms of her mental health issues often mimicked the medication side effects, so her family did not know if her erratic behavior was caused by her illness or the drugs used to treat the illness. Eventually, Katelyn would end up in treatment again, she would be prescribed more drugs, and the cycle would continue.

When she was sent home after her eighth hospitalization, Katelyn was so heavily medicated that she could not function or even focus her eyes. Her family took her to the emergency room at Memorial Health University Medical Center (MHUMC). Katelyn was admitted to the Center for Behavioral Medicine at MHUMC, the only facility in the region with a combined medical-psychiatric service to treat people with complex physical and mental health issues. The Traub family immediately knew that this treatment would be different.

“They listened to our concerns. They treated all of us with dignity. Nobody had ever done that before,” said Traub.

Katelyn was taken off all of the prescription drugs through a medical detox process. The doctors, nurses, and therapists observed her, talked to her, listened to her concerns, and truly got to know her. They were determined to get to the root of the problem and help her regain control of her life. Katelyn began a process of therapy and intervention.

Eventually, another manic episode occurred. Katelyn’s family took her back to MHUMC and she was again admitted to the Center for Behavioral Medicine. Within just three days, the family finally had a diagnosis: bipolar disorder 1. It is a mental illness characterized by periods of abnormally high energy and mood that disrupts normal behavior and functioning. Bipolar disorder 1 affects nearly 6 million people in the United States. Episodes typically begin in the teens or early 20s. Doctors don’t know what causes it or why it affects some people and not others.

“They [Katelyn’s care team] explained to us what was happening. They created a treatment plan and an exit strategy. Katelyn finally had a normal shot at life,” said Traub.

Bipolar disorder 1 can be controlled with the drug lithium and lifestyle modifications. Katelyn spent a month at MHUMC learning how to manage her illness, how to cope with it, and how to live her life fully in spite of it. She attended therapy sessions and learned all about her condition. The therapists and nurses also worked with the Traub family, answering their questions and teaching them how to help Katelyn. Annemarie was touched by the how much the team truly cared about Katelyn.

“They were so concerned about her mental and physical well-being. They let her know that having a mental illness does not make you any less valuable as a person,” said Traub.

It was the little things that really helped the family turn a corner. They could visit Katelyn any time they wanted, and they were always greeted warmly. When Katelyn was worried about her hair, her doctor wrote her a prescription for her favorite conditioner. And, the Center for Behavioral Medicine provided nutritious meals to make sure Katelyn stayed strong and healthy physically.

“This is by far the best mental health facility in our region. It is so important that we keep these services open to help the people who need it,” said Traub.

Today, Katelyn is 20 years old and doing well. She has taken charge of her life and she looks forward to a bright future.

“We are so proud of Katelyn. It takes a lot of courage and strength to get through to something like this. Katelyn is sharing her story so that other people in our region know there is help and there is hope,” said Traub.

The Traubs encourage anybody living with mental illness to keep looking for answers. Don’t give up. And utilize the life-changing resources at the Center for Behavioral Medicine at MHUMC.