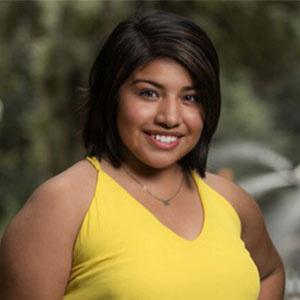 When she was just 16 years old, doctors told Mariela Villa that she was dying. Fortunately, she didn’t listen. Today, at age 18, the strong, vivacious teenager has already experienced more in life than some people twice her age. For Villa, every day is a new adventure.

In January 2014, Villa was a high school junior living in Lyons, Georgia. She was the captain of the majorette line and spent much of her free time twirling batons. Villa noticed that her skin was always pale and she would bruise easily. She also felt extremely tired and could not get through a majorette practice without stopping to rest. She soon developed a fever and cough that sent her to the doctor.

Initially, Villa was diagnosed with mono. But she knew she took good care of herself and in her heart, she felt it was something more. By January 21, she was so weak she could not move. Her entire body ached. She was taken to the Memorial Health Dwaine & Cynthia Willett Children's Hospital of Savannah for a blood transfusion and medical tests. Three days later, Villa learned that she had acute myeloid leukemia.

“When he [the doctor] said I had cancer, my whole world kind of stopped. Every complaint I had ever had before didn’t compare to what was now before me,” said Villa. “With any life-changing event, people need to see it to believe it. I didn’t know how to cope with it without seeing it. But the cancer was in my blood, so I could only feel its effects.”

Villa could not leave Willett Children’s Hospital for six months. She received four rounds of chemotherapy. The first round required 10 days of infusions. Her entire immune system was wiped out, which made her very susceptible to germs and infection. She stayed in her own suite, ate specially prepared foods, and had limited contact with other people. Her parents stayed with her as much as possible, but they had to divide their time between Villa, their jobs, and their other children in Lyons. With the help of child life specialists at Memorial Health, Villa practiced yoga, created art, and chatted with friends on social media to pass the time.

Villa lost her hair and experienced extreme aches and fatigue from the chemotherapy. Each round became more strenuous for her body. After her final round, she could barely move. Her veins were so weak they could not support an I.V. to receive fluids.

“I tried to be strong. I wanted to be an easy patient for the doctors and nurses. But I could not even handle the pain of a tiny needle anymore. They knew I needed help,” said Villa.

Villa had emergency surgery to put a tube in her thigh to receive medication and fluids. When she woke up from the surgery, she was in the intensive care unit (ICU). She was confused, disoriented, and could not sit up or walk on her own. She then developed an infection in her blood stream and had no immune system to fight it.

“I like to be in control, to know how things will turn out. With cancer, you never have that,” said Villa.

Villa’s body was not recuperating and her immune system was not rebuilding itself. Her situation was becoming more dire each day. Villa vividly remembers one day in June when her doctor spoke to her and her mother in the ICU. He told her that they had done everything they could to help her fight the infection and that death was a very real possibility. He told her she might only live another week. She needed to say her goodbyes.

“I was mad. I had been promised that I would live and have good days after cancer. I thought, ‘this is it? You can’t make this better?’” said Villa.

Then a memory came to her. A few months before she got sick, a man at her church told her that he’d received a message specifically for her. In the message, God told the man that Mariela would grow to be very old and take care of children that nobody cared about. Villa remembered the encounter and decided she was going to get better, regardless of the infection, because she to take care of those children.

“I was not going to die at 16,” said Villa. “I threw death out the window and put my whole faith in God. I told my mom, ‘I’m going to be fine. You can talk about my death with the doctors, but it’s not going to happen. God said so.’”

Villa began to fight and made an amazing recovery that surprised her family, her friends, and her doctors. Her blood counts improved. Her strength returned. She was moved out of the ICU and back into a regular room. Best of all, there were no signs of cancer in her body.

On July 4, 2014, Villa was released from the hospital. She jokes, “I got my independence on the same day as America.”

Villa went back to school that fall. She doubled up on classes to make up for the semester she had missed. She graduated with her friends in May 2015. Shortly after finishing high school, she made plans to develop a nonprofit organization called Giving Voices. She plans to speak for the voiceless and advocate for teens with cancer. She hopes to make it to every state, offering support to teenagers receiving treatment. Villa explains:

“I want other teens to know that cancer is not death. It is their new life assignment. My assignment will be to wait for them with open arms. Their assignment is to get through it and come back to someone like me.”