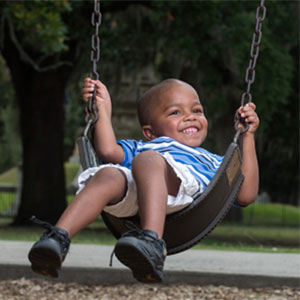 It was supposed to be a routine well-child visit in November 2015. Carolyn Luten Williams remembers that her 3-year-old son, Rion (R.J.), was dancing around the exam room shirtless while they waited for the doctor. R.J.’s protruding belly did not seem out of the ordinary to Carolyn. She has three other children and knows that toddlers often have round bellies until they grow into their bodies. But the doctors examining R.J. thought his stomach was protruding a bit too much. They felt an unusual lump on R.J.’s abdomen and sent him straight to Memorial Health University Medical Center for tests

Imaging tests showed a tumor on R.J.’s left kidney. Doctors also noted that R.J.’s blood pressure was extremely high. They immediately admitted him to the critical care unit at the Memorial Health Dwaine & Cynthia Willett Children’s Hospital of Savannah. In a matter of hours, the Williams family’s life was turned upside down.

“My heart just dropped. I couldn’t think. I didn’t know what to do. My baby was in ICU and they said he needed surgery within 48 hours,” said Carolyn.

But Carolyn was not on her own. The doctors and nurses at the Memorial Health Willett Children’s Hospital guided her and her husband through every step of the process. They explained that R.J. had a Wilms tumor, a type of cancer that can grow very large before it is noticed. Doctors explained that most Wilms tumors can be cured with treatment.

Within three days, R.J.’s blood pressure was stable enough for him to have surgery. Pediatric surgeon David Carney, M.D., removed the one-pound tumor as well as R.J.’s left kidney. After surgery, the little boy began 16 weeks of chemotherapy, or has he called it, “R.J. juice.” Carolyn said watching her child endure the rigors of chemotherapy was awe-inspiring.

“He handled it much better than I did,” said Carolyn. “He would run around smiling. He didn’t know how serious it all was. As his mom, I just wanted to be able to take his place.”

Throughout R.J.’s treatment, Carolyn was overwhelmed by the care her child received. John Whittle, M.D., was the family’s pediatric hematologist/oncologist. Carolyn said Whittle, Carney, and all of the nurses were amazing and were with her every step of the way.

In March 2016, R.J. received his last chemotherapy treatment. Four months later, he celebrated his 4th birthday and prepared to start pre-K. He is currently cancer free and is expected to have a full, active life, even though he only has one kidney.

After their roller coaster ride with cancer, the Williams family is attempting to get back to some semblance of normal life. Carolyn offers advice for any family coping with a child’s cancer diagnosis:

“Just go one day at a time. You have to focus on what needs to be done that day, and don’t worry about what will happen the next day. And any time that you feel ready to give up, just look at your child’s face and smile.”