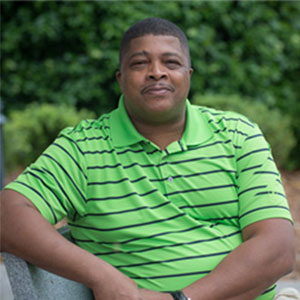 Rufus Austin says he always loved the people-oriented nature of the retail business. And it may well have saved his life, or at least prevented him from being permanently disabled. A friendship he struck up with a regular customer ended up leading him to seek help quickly when he began to experience stroke symptoms and today he is well on the way to recovery.

“I was working and I started going numb in my right hand and it started to swell,” said Austin, who was the retail manager of a Habitat for Humanity store in Savannah. “ Shortly after that I started feeling numbness in my right leg and feeling tired, so I went to the office and sat down.”

He didn’t know it then, but the clock was ticking on the three-hour window in which a clot-busting drug could reverse many of the symptoms of his type of stroke. Fortunately, a customer he’d struck up a friendship with stuck his head in the office door to say hello and learned he wasn’t feeling well. The customer, who had been a paramedic, spotted the symptoms that warned Austin was having a stroke and advised him to get to a hospital.

At Memorial Health University Medical Center’s emergency department, tests determined that Austin was having an ischemic stroke (caused when a blood clot plugs an artery in the brain.) He was treated with a clot-busting drug, tPA, or tissue plasminogen activator, that had almost immediate effect.

“Within 20 or 30 minutes of receiving that, I had full range of motion in my arm and my leg,” said Austin. The drug tPA is a powerful drug that can only be used under specific circumstances and requires careful medical monitoring after its administration. Austin spent the next 25 hours in the neurological intensive care unit (NICU) before being transferred to a regular room for a short hospital stay. Within three days of his stroke, he was able to go home. Two months later, he’s still going to outpatient therapy two days a week, but is largely recovered.

"This case is a good example of how acting quickly at the onset of stroke symptoms can really improve the outcome. Mr. Austin is making a good recovery, and part of that can be attributed to getting help quickly," said Katherine Moretz, M.D., a neurologist with Savannah Neurology Specialists, who treated Austin at Memorial Health.

Austin is grateful for everyone who played a role in his recovery, from the customer who sounded the warning to the doctors who treated him. And that care extended to his family, he noted. For example, when he arrived in the emergency department, his cell phone had run down. A nurse there went in search of a charger and charged it up for him so he could talk to his wife.

Austin’s story is a prime example of the value of a timely response when stroke symptoms appear. Call 9-1-1 and get immediate help if you or someone with you experiences any of the following symptoms: