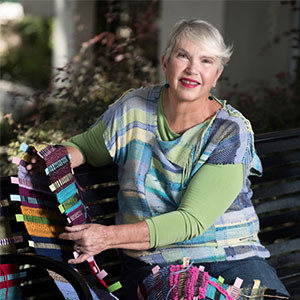 Suzanne “Suzy” Hokanson’s fingers move expertly through her loom, weaving row after row of colorful yarn. The Savannah resident has had a love of fiber art her entire life.

“I started by learning how to knit from my mother. Then I started spinning my own yarn, and then weaving,” said Hokanson.

She is never far from a loom. She even takes one with her on the sailboat in upstate New York where she spends her summers. Creating vibrant clothing, tapestries, and décor brings joy and calm to her life.

“There is something very powerful about creating things. It gives you focus. When I’m working, I focus on what I’m weaving and not on other worrisome things,” said Hokanson.

That soothing focus became especially important in 2012, when Hokanson learned she had cancer. It started with a bump, similar to a cold sore, on her tongue. She was shocked when the bump was diagnosed as squamous cell carcinoma, a type of skin cancer that grows in the outer layers of the skin.

Hokanson met with otolaryngologist Stephen Rashleigh, M.D., and Aaron Pederson, M.D., a radiation oncologist at the Memorial Health Curtis an Elizabeth Anderson Cancer Institute (ACI). Together, they decided surgery would be the most effective treatment for her. In the spring of 2012, Hokanson had surgery to remove a portion of her tongue.

After surgery, she returned to the life she enjoyed with her husband, her four grown children, and her weaving. She created weavings to display at Gallery 209 in Savannah and enjoyed another summer on Lake Champlain in northern New York.

Eighteen months later, a routine CT scan found suspicious spots on the lymph nodes in Hokanson’s neck. Some of the cancer cells had spread and would require more aggressive treatment.

Rashleigh performed a partial neck dissection, removing all of the lymph nodes from the left side of Hokanson’s neck. That was followed by 32 radiation treatments with Pederson and five chemotherapy treatments with medical oncologist L.E. “Bud” Robertson, M.D. After the surgery and treatments, Hokanson’s tongue was partially paralyzed, which makes swallowing and speaking difficult. But she feels it’s a small price to pay to beat cancer.

“I’m still here. Life goes on. This is my new normal,” said Hokanson.

After recovering from her second surgery and treatments, Hokanson wanted to do something to help other people affected by cancer. She also wanted to give back to the ACI and thank the people who had saved her life. She decided to share the one thing that brought her so much joy and serenity: weaving.

“I know what it feels like to sit in that [ACI] lobby. You sit there with a head full of worries and fears,” said Hokanson. Those feelings inspired her to develop “Weaving Hope.” She brought a loom to the ACI lobby to create a project with the patients and caregivers there.

“I started by writing ‘I hope...’ on colorful strips of card stock and I asked people to fill it in. They could write their hope at that particular moment. It did not have to be cancer-related. The goal was just to get them to think about hope and take their minds off of everything else for a moment,” said Hokanson.

She then invited everyone in the lobby to sit down at the loom and weave their hopes into the artwork. The result was a vibrant and inspiring tapestry that is now on display in the ACI.

Hokanson has made Weaving Hope a regular feature at the facility. The Fiber Guild of the Savannahs generously loaned a loom to the ACI and many volunteers have donated yarn. Weaving Hope has only been in existence for a year, but participants have already produced three colorful works of art on display in the ACI lobby. One of the elaborate weavings reaches from floor to ceiling.

Weaving Hope impacts every person who sits down at the loom. It is an opportunity to briefly escape the worry and fear of cancer and instead focus on contributing to something lasting and beautiful. For Suzy Hokanson, it is a way to weave joy into everyday life, one person, one moment, and one thread at a time.