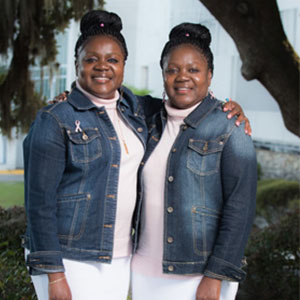 Twin sisters Sylvia and Cynthia Whitfield share more than just a birthday. They both served 21 years in the U.S. Army. After retiring from the Army, they both settled in the Savannah area. And they have both battled breast cancer.

Sylvia was diagnosed first. At age 40, she was preparing to deploy to Iraq and scheduled a mammogram before leaving. She was shocked to learn that she had breast cancer.

“I was going to wait and have my mammogram after I returned [from Iraq]. I’m so glad I didn’t wait,” said Sylvia. Rather than deploying, she stayed stateside to undergo a lumpectomy and radiation treatment. To monitor her health after treatment, Sylvia had alternating mammograms and breast MRIs every six months.

After watching her sister go through cancer treatment, Cynthia was diligent about her own breast health. She had regular mammograms and took care of herself. But at age 46, she was also diagnosed with breast cancer.

“It was upsetting, but I didn’t look at it as a death sentence. My sister had been through it, and I knew what I had to do to get through it,” said Cynthia.

Cynthia also chose to have a blood test to see if she carried a genetic factor that made her more likely to get breast cancer. The results showed that she did, in fact, have a gene mutation in her body called BRCA2. In the general population, the average woman has a 12 percent risk of developing breast cancer. In women with a BRCA2 mutation, that risk increases to between 40 and 85 percent. It also increases the risk of developing ovarian cancer.

Sylvia did not have a genetic test. But based on her sister’s results, her doctor told her it was extremely likely that she also carried the BRCA2 gene mutation. Sylvia was then diagnosed with breast cancer again. This time, it was a highly aggressive form of the disease called triple negative breast cancer. Sylvia had both breasts removed, followed by chemotherapy and radiation. She later experienced complications related to radiation side effects and is still completing the reconstruction process.

Having gone through decades of military training and three rounds of breast cancer treatment between them, Sylvia and Cynthia know a thing or two about overcoming challenges. They offer the following advice for anybody coping with cancer:

Today, both of the Whitfield sisters are doing well. They remind women everywhere to get regular mammograms to screen for breast cancer. You can schedule a 3D mammogram at Memorial Health University Medical Center by calling 912-350-PINK (7465).