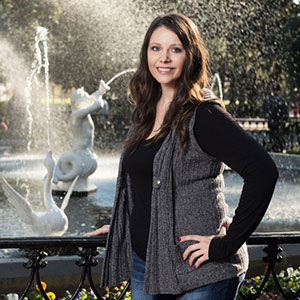 For Brandy Williams, life as she once knew it ended in May 2011. That’s when, at the age of 20, she was involved in a car accident that nearly killed her. She has spent the last five years relearning basic skills and rebuilding herself. She says she would not be here at all were it not for the Level 1 trauma center and team at Memorial Health University Medical Center (MHUMC) in Savannah.

“Because of the trauma team, I have my life. They knew what to do to save me and that means so much to me,” said Williams.

Williams’ accident happened late at night. She was texting while driving, lost control of her car, and drove off the road and into a bank of trees. She was thrown from the car and spent two hours lying on the ground, shocked, and drifting in and out of consciousness. She didn’t even realize that her leg had been severed in the crash or that she was on the verge of bleeding to death. A passing motorcyclist found her and called 911. She remembers his flashlight in her eyes, but nothing else.

The accident happened in Lyons, Georgia. Williams was put in a helicopter and flown to MHUMC, the only high-level trauma facility serving 28 counties in southeast Georgia and South Carolina. It is one of only five such facilities in the entire state of Georgia.

Because MHUMC is a Level 1 center, trauma surgeons and specialists were already on site, even in the middle of the night. The moment the helicopter landed at MHUMC, the team went to work saving Williams’ life. She had lost a tremendous amount of blood when she lost her leg. She had many broken bones and swelling in her brain. Surgeons operated and repaired her broken bones. Williams was then put into a medically induced coma until the swelling in her brain subsided. While in the coma, she had a stroke that affected the entire right side of her body and her ability to speak.

“I had never heard of having a stroke so young, but it can happen,” Williams said. She was in bad shape, but she was alive.

Two weeks later, Williams woke up in an intensive care unit at MHUMC. She could not move the right side of her body or talk. Williams pushed back the blanket that was covering her and realized that she only had one leg. Her parents were in the room with her and had to explain what had happened.

“I was in complete disbelief after discovering my leg was missing. I couldn’t talk or move so I just cried. It was the only emotion I could show at the time because I was so disoriented,” said Williams.

Williams spent two months at MHUMC, receiving around-the-clock care. Each day, she regained a bit more strength and determination. By late summer, she was able to move to a rehabilitation facility. That’s when she began the challenging and painful process of regaining her independence.

“It was like being an infant trapped in a 20-year-old’s body. I had to learn how to talk and walk again. It was extremely difficult,” said Williams.

With a rigorous schedule of physical therapy, speech therapy, and occupational therapy, Williams learned how to walk with a prosthetic leg, talk, and function. She could not regain full dexterity in her right fingers, so she became left-handed instead. One of her greatest days was when she was able to walk back to the intensive care unit and visit the nurses and doctors who had cared for her in those first precarious weeks.

“I told them, ‘because of you, I can walk and talk again. I have my life and am so grateful for the excellent service I was given during my hospital stay,’” said Williams.

Today, she is using her own personal struggle to help others. In 2016, she graduated from Armstrong State University with a bachelor’s degree in communication science and disorders. In 2017, she began graduate school studying speech therapy at Valdosta State University. She also co-facilitates an amputee and stroke survivors support group.

“I live a pretty normal life. I can’t run, but I wasn’t a runner before the accident,” jokes Williams. On a more serious note, she reminds others that life can change in an instant.

“We are so self-absorbed and comfortable in life that we often do not think of the consequences of our actions. My actions had a huge negative impact on my life. But thankfully, I'm still here to share the positive outcome of my story with others. I hope it makes a difference,” said Williams.

Brandy Williams is a testament to the ongoing need for Level 1 trauma services in our region. Thanks to excellent medical care and her own hard work, she is alive today and is embracing her new life with inspiring courage.